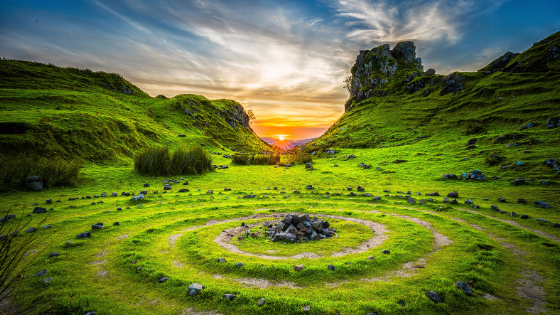 How to Cast a Circle

It is believed that since the beginning of time, Witches have used the circle to define their area of work and worship. In truth, we are unsure of how long Witches have been using the circle as there is really no record to check back on in history for true facts. But we do know that drawings in old caves lead us to believe that the use of a circle for worship and ritual has been around for a very long time. It has and still remains a powerful place for us to work in.

Please note, as with all things related to the Craft, casting a circle is personal and flexible. There are no hard and fast rules. If you have participated in a group ritual before, you will have seen one way to cast. If you are with a coven, you will have another way to do it. These directions are only guidelines for you, a basic framework from which to build upon.

What is a Witches Circle?

Although we call it a circle, it is really more of a sphere of energy, like a large bubble, extending even beyond the ground beneath you. The circle acts as a boundary of an area which is sacred, a safe place for work and worship. It is the area you create in which to perform your rituals and work your magic. When the circle is properly laid out it forms a protective barrier against negative spirits, as well as, keeps all positive energy raised within.

The circle leads back into itself and is a symbol of unity – the absolute and perfection. A circle is an endless time: it has no beginning and no end. The circle is in the form of a serpent biting its own tail: the serpent is the symbol of wisdom, knowledge, and power. There is a close connection between the circle and the wheel, again – endless time.

Is it Always Necessary to Cast a Circle?

Of course not! Many times you will find yourself in a spur-of-the-magical-moment event where casting would be a hindrance. It is simple enough to ground and center, envision a protective circle around you, and remain fully attuned to the task. However, there is nothing to compare to the act of creating a sacred space by casting a circle, so when time permits, I encourage you to do it.

Although it is preferable to work outdoors, it is not always possible for everyone to do this. You may live in a city or town and be unable to get into direct contact with the Earth. Your temple, therefore, can be a whole building, a single room, or a small section of a room.

The dimensions of the magic circle will largely depend upon the size and amount of people who will be using it. For solitary work, a three to five-foot circle will do nicely and for group rituals, a nine to thirteen-foot circle is usually considered large enough. You will need room for that altar and those in attendance to move around comfortably.

To make sure your boundary line is done properly, it is a good idea to mark the circle with a cord or tape. If you have a permanent temple, it can be painted in white paint on the floor, or on the backside of a rug. This is always a good idea, as the circle is ready for you whenever you need it and it permanently holds some of the energy you have created during your rituals.

Place items that represent the directions/quarters/elements at each point in order to define the four corners of power. Your circle will encircle them. While candles are romantic in the movies, for safety reasons I recommend thinking beyond the traditional. I like to place a geode in the North/Earth, a bowl of water in the West/ Water, feathers that have been found on my property in the East/Air, and an LED candle in the South/Fire (modern technology is wonderful). You can also use corresponding cards from your tarot deck as markers.

What you are doing is creating a symbolic link between you, the essential quality of the four elements, and the Divine. Keep in mind that the circle is three dimensional as well as a symbol of the Universe. There are three levels to the sphere ~ Above, Earth and Below. With the saying “as above, so below” we are encompassing the full realm of existence. Your circle should be visualized as surrounding you on all levels.

How to Cast the Circle

Stand in the center of your (uncast) circle. Take a deep breath in, slowly, and then fully exhale. Still your body and mind by grounding and centering yourself in the moment.

Move over to the East. Using your wand, athame, or simply the pointer finger of your dominant hand, walk the circle deosil and call upon its power and protection. Feel free to use your own words, or borrow the following:

that thou be a Boundary and a Protection and a meeting place between the physical world and realms of the Mighty Ones,

A Guardian and a Protection that shall preserve and contain the Power which shall be raised within,

Wherefore do I Bless and Consecrate thee.”

You will have returned to the beginning point and can move back to the center of the Circle.

Turn to the East, wand or athame in hand, and draw an invoking pentacle in the Air (starting at the top and going to the lefthand corner) saying “Spirits of Air, I call on you, Guardians of the Watchtowers of the East, Mighty Ones, to guard the Circle and bear witness tonight.”

Turn to the South, draw an invoking pentacle in the air and say “Spirits of Fire, I call on you, Guardians of the Watchtowers of the South, Mighty Ones, to guard the Circle and bear witness tonight.”

Turn to the West, draw an invoking pentacle in the air and say “Spirits of Water, I call on you, Guardians of the Watchtowers of the West, Mighty Ones, to guard the Circle and bear witness tonight.”

Turn to the North, draw an invoking pentacle in the air and say “Spirits of Earth, I call on you, Guardians of the Watchtowers of the North, Mighty Ones, to guard the Circle and bear witness tonight.”

Still facing North, close your eyes and raise your arms. Draw up the power from the Earth and pull down the power from the Moon while saying “The sky above me, the sea surrounds me, the earth beneath me, Thus the Realms make sacred this circle. So mote it be.”

Once the circle has been cast you are ready to meditate, perform your ritual or work your magic. In case you were wondering, there are only a few things to keep in mind about the circle:

Banishing (or Withdrawing) the Circle

When you are finished with your work you will want to thank the Elements and their Guardians. To do this, stand in the center of the circle again and face the East. You can say a simple thank you and farewell or borrow some fancy language such as “Hail, ye mighty ones of the East. I thank you for attending, and ere ye depart for your lovely realms. Hail and Farewell.”

Now continue saying this to the North, West, and finally South. When you are back to facing East you will want to walk over to where you began, and again, using your wand, athame or pointer finger, walk in a widdershins (counter-clockwise) direction. Imagine the boundaries of the circle dissolve or fade as you go and feel the energy being released into the Universe.

“The Circle is Open but Unbroken, 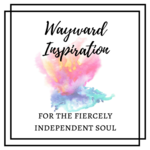 Sign up to receive the newsletter filled with seasonal insights and self-care motivation delivered straight to your inbox. You will also receive free monthly downloads to help you on your magical journey.

I value how important your time is and understand how you don't want inbox overload. There is nothing worse than signing up for a newsletter then getting flooded with sales pitches! Rest assured when you see Wayward Inspiration pop up in your inbox, it's because I'm sharing something I believe you will find truly valuable.

Our community is about making connections and offering support along the way. Welcome!

Success! Now check your email to confirm your subscription.

This site uses Akismet to reduce spam. Learn how your comment data is processed.